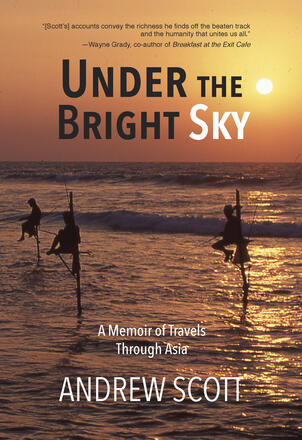 A Memoir of Travels through Asia

Under the Bright Sky: A Memoir of Travels through Asia brings together ten personal travelogues set in ten Asian countries over a period of several decades. Each story is a snapshot of a distinct time and place, covering a vast and complex landscape, both physical and emotional. Intimate recollections stretch from a father's desire to revisit Sri Lanka, where he had been posted fifty years earlier during WWII, to a spouse's search for long-lost relatives in the small villages of southern China. A widowed husband mourns; the stages of a new romance are celebrated in India and Indonesia. Cultural conflict is encountered in Turkey; cultural cooperation in Vietnam. Together, these intimate recollections are a meditation on the relationships between cultures. Interlaced with each new experience is a sense of familiarity and appreciation as Scott places his own travels into the context of those before him, exploring our interconnectedness--a Thai Buddhist abbot in search of the perfect piece of BC jade, and the first Japanese visitors to the Pacific Northwest, a group of seamen who arrive the hard way, drifting in their disabled vessel for more than a year. In Under the Bright Sky, award-winning author Andrew Scott ventures through time and space in search of connection and meaning. His devotion and insight will inspire travellers and historians alike.

"An elegant collection of travel stories.... Scott's journeys were never mere sight-seeing trips. For this writer with his immense curiosity, each was an investigative expedition, 'accepting the unfamiliar and paying attention to the differences and similarities' around him. As he writes in his epilogue, he was trying 'not to approach travel as a checklist of destinations to be ticked off and then forgotten.' And this approach has made this elegant collection of travel stories taken from his journals not easily forgotten either."

“What can a reader expect to encounter within the pages of Andrew Scott’s essays about his travels through Asia? The most beautiful travel writing I’ve read in years, filled with detailed accounts of history, food, weather, encounters with diverse and interesting people, surprising revelations about personal grief and uncertainty, the early loss of a beloved wife, and the courtship of the woman who becomes his companion in life and travel. I loved the author’s witty narrative of accompanying his aging father to Sri Lanka and I loved his keen eye for birds, plants, architecture, and the shifting nature of tourism as he navigates cities and countrysides in places as far flung as Laos and Turkey, that meeting place of Asia and Europe. The essays gave me wanderlust and the great pleasure of time in the company of a fine writer and a curious mind.”

“From meeting Arthur C. Clarke in Sri Lanka to roaming deeply biblical sites in Turkey, Andrew Scott adventures with an open heart. His reports on the West Coast’s own interconnectedness with Asia are a welcome bonus.”

“Under the Bright Sky is that rare travel book that combines a stunning sense of place and history with sensitive portraits of the people. Andrew Scott never shies away from the push-pull of being a privileged visitor in a struggling milieu; he solves the dilemma by ensuring that his accounts convey the richness he finds off the beaten track and the humanity that unites us all.”

—Wayne Grady, author of The Good Father and co-author of Breakfast at the Exit Cafe

“‘Asia was beginning to wrap itself around me, scene after scene, each one more tantalizing, more marvellous, than the last,’ Andrew Scott writes at the beginning of Under the Bright Sky, his enchanting book about travelling in Asia. Sharing the photographs he snapped along the way, Scott takes the reader to ten countries, going by boat, train, bus, bicycle and in rickety aircraft where plumes of smoke fill the cabin on take-off. He avoids tours and fancy hotels, preferring the kind of place where elephants show up at the back door hoping for snacks. Everywhere he eats local delicacies. The book is an entertaining treat. But he also has a serious message. He observes that in parts of Asia, people of different religions once collaborated remarkably well: Christians, Muslims, and Jews in southeast Turkey or Hindus and Buddhists in Indonesia, Thailand, and India. ‘The East might still have a few things to teach the West,’ Scott writes.”

—Claudia Cornwall, author of British Columbia in Flames: Stories from a Blazing Summer